Islam is a religion founded by the prophet Muhamed (also spelled “Mohammed”) in the early 7th century. Though Islam does not feature a hierarchy or clergy comparable to that of Roman Catholicism or Eastern Orthodoxy, the leader of a mosque (or place of worship) is called an imam, and imams lead religious services and serve as community leaders.  The practice of Islam came westward to Bosnia as a result of the Ottoman Empire’s conquest of the area beginning in the 15th century.  Although Bosniaks identify most closely as  practitioners of Sunni Islam, many today consider themselves non-denominational Muslims. Bosnian Muslims (Bosniaks) make up slightly over half of Bosnia’s population. 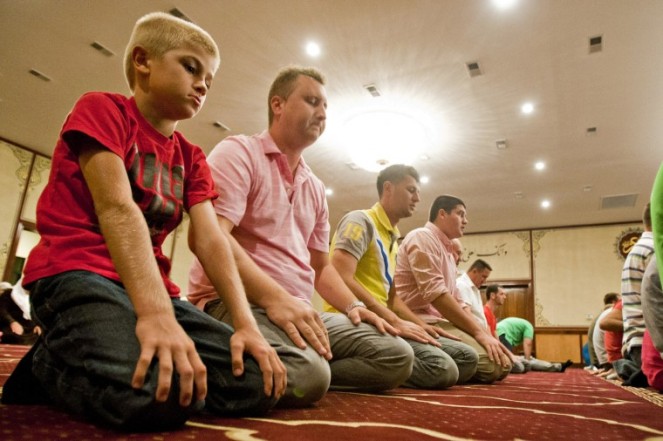 Above:  Service being held in the Bosnian Islamic Center of Bowling Green. Photos by Alex Slitz of the Bowling Green Daily News. 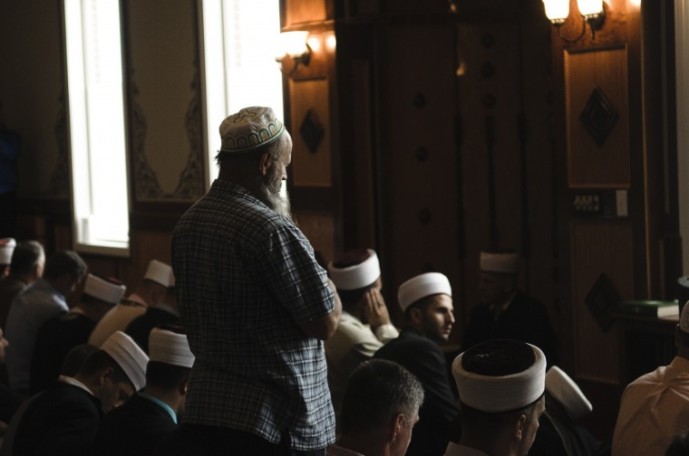 Above: Service being held at the Bosnian Islamic Center of Bowling Green. Photos by Pete Rodman of the Bowling Green Daily News.

Several objects featured in this exhibit are used in the practice of Islam, including prayer rugs, prayer beads called Tespih, and a book rest.  As can be seen through these objects, as well as the interiors of Bowling Green’s local mosques, just because religious items are functional does not mean they cannot be beautiful.  Like clothing and other objects of the home, those objects brought from or purchased in Bosnia are highly valued by Bosnian Americans, and even more so if they are homemade.  While depictions of people and animals are discouraged in Islam, objects and architecture are often decorated in floral or vegetal designs.  Interiors of the mosques are also often decorated in calligraphy that offers supplication to God, lists God’s many names, or quotes from passages from the Quran.  The designs of prayer rugs also often reflect the designs found in Islamic architecture.

A prayer rug is fabric, sometimes carpet, placed on the ground to provide cleanliness for the worshipper during prayer, which involves sitting on the ground or kneeling.  Prayer rugs, often handmade, are treasured by those who own them and are frequently passed down in families.  For well-used rugs, one can even see wear marks where the feet of the user has rubbed them over time.  Though not required, there is also a special way these rugs may be folded and stored, to keep them clean for use for a long time.

The design of Denis Hodžić’s prayer rug reflects the architectural elements of a mosque.  The dome-like shape in the middle reflects the domed space where the imam stands during religious services.  The pointed top of the dome also indicates to the user which direction to place the rug on the ground.  When praying in Islam, it is important that one face the direction of (and the top of the prayer rug be pointed towards) Mecca, the Islamic center for prayer.  The head of the unfolded rug in this exhibit points towards the direction of Mecca.

The tespih (Bosnian), or misbaha (Arabic), is a string of beads used by Muslims during Islam’s 5 obligatory prayers as well as other optional prayers and/or other acts of worship and supplication. It is used to keep count while reciting the many names of Allah (the Arabic word for God),  “duas” (prayers that an individual is sending to Allah to plead for help, forgiveness, guidance, etc.), or short prayers of praise and glorification of Allah. Tespih may feature 33 beads, a standard for use during obligatory prayers, or 99 beads, which is intended for prolonged supplication. Some tespih may have even more beads, used for group supplications and/or during the holy month of Ramadan when Muslims increase their worship.

The Quran stand, also known as rehal, or a book rest, is used for holding up the Holy Quran so that it is accessible during prayer, which involves sitting on the ground or kneeling.